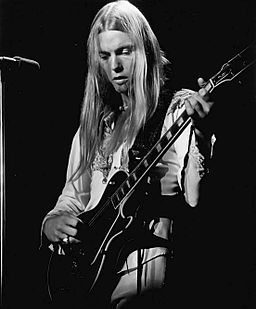 Gregg Allman, who led the Allman Brothers Band’s effort that ushered in the “Southern rock” era in the 1970’s died Saturday from complications from liver cancer, according to his manager Michael Lehman at the age of 69.

Last month, reports said Allman was in hospice, and Allman then substantiated it in a Facebook post.  The rocker suffered from a number of physical problems in recent years-an irregular heartbeat, a hernia and a resperatory infection and cancelled many of his tour dates in recent months for health reasons.

Allman’s solo album that he completed, “Southern Blood” is set for release late this year.

The Allman Brothers song “Ramblin’ Man” made it to number two on the Billboard Hot 100 on September 6, 1973.  The group broke up after a Drug Enforcement Agency investigation around narcotics activity by the band brought the arrest of road manager John “Scooter” Herring. Allman received immunity for his testimony against Herring.

Gregg Allman had success in making it to number 19 on the Billboard Hot 100 list in 1974 with a song of his own, “Midnight Rider”.

Allman married Cher in 1975 and they had a son together, Elijah Blue Allman, but she divorced him in 1978.  citing his drug abuse as one of the underlying reasons for their split up, telling Entertainment Weekly that “Allman’s heroin and liquor problems were too much for her to handle.”

In recent years, Allman had talked about his seven divorces and said they were, indeed, caused by his abuse of alcohol and heroin.

Be the first to comment on "Gregg Allman dead at 69"

This site uses Akismet to reduce spam. Learn how your comment data is processed.

Listen to KYNA on Live365.com!

You Tube Video of the Day

Listen to KYNA on TuneIn!